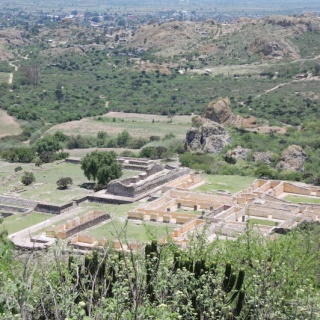 This property lies on the northern slopes of the Tlacolula valley in subtropical central Oaxaca and consists of two pre-Hispanic archaeological complexes and a series of pre-historic caves and rock shelters. Some of these shelters provide archaeological and rock-art evidence for the progress of nomadic hunter-gathers to incipient farmers. Ten thousand-year-old Cucurbitaceae seeds in one cave, Guilá Naquitz, are considered to be the earliest known evidence of domesticated plants in the continent, while corn cob fragments from the same cave are said to be the earliest documented evidence for the domestication of maize. The cultural landscape of the Prehistoric Caves of Yagul and Mitla demonstrates the link between man and nature that gave origin to the domestication of plants in North America, thus allowing the rise of Mesoamerican civilizations.