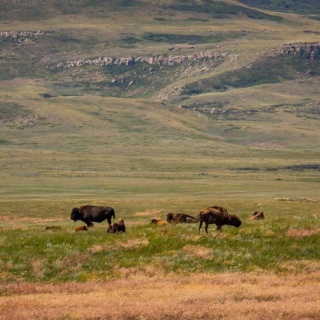 In south-west Alberta, the remains of marked trails and an aboriginal camp, and a tumulus where vast quantities of buffalo (American Bison) skeletons can still be found, are evidence of a custom practised by aboriginal peoples of the North American plains for nearly 6,000 years. Using their excellent knowledge of the topography and of buffalo behaviour, they killed their prey by chasing them over a precipice; the carcasses were later carved up in the camp below.